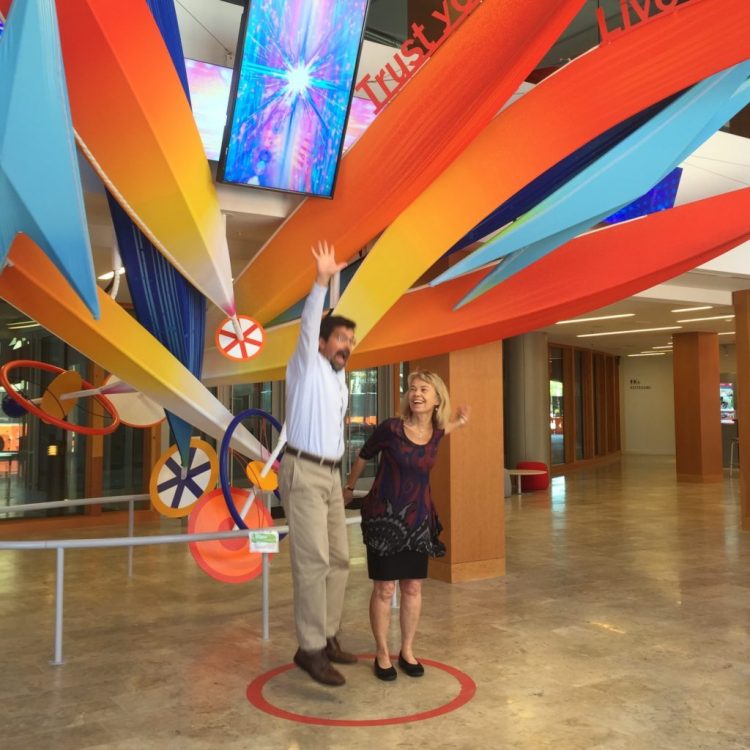 The biggest game in Idaho is potatoes, and in Boise you can’t say “potato” without thinking of J. R. Simplot. With a handshake and a tip of his oversized Stetson, J.R. brokered the deal of a lifetime, and became the sole supplier of frozen fries to little fast-food chain called McDonald’s. At the time of his death in 2008, J. R. was one of the hundred richest men in America. He loved invention and inventiveness, and wanted to inspire the citizens of his beloved state to try harder, do better, think bigger. His legacy is JUMP, a public centre for creativity and exploration, a place to take a chance, to jump into the unknown, to scare yourself a little, to try something you’ve never tried before.

Plus, there’s the tractors. The over 50 museum-quality tractors on display in the park, in the building, and in the parking garage were part of J. R.’s impulse to collect Boise’s agricultural past. But the Simplot Foundation didn’t want the usual “museum” treatment when it came to text. They wanted to ensure the tractors inspired visitors to take chances. They wanted the tractors to be springboards to new discoveries. Key words for this project were definitely “surprise” and “delight”.

The resulting text panels are bright and beautiful. The information on them is often surprising. The images are startling. TD Heritage researched the tractors, selecting out-of-the-ordinary information and always keeping the visitor in mind—Why would the average person care about this harvester? What does a hundred-year-old tractor have to do with them? Connecting the people who designed and used tractors to a modern urban audience meant thinking laterally: The orange colour of an Allis-Chalmers tractor was as distinct to a Depression-era farmer as UPS brown or Tiffany blue is to a consumer today. The build-it-yourself Thieman tractor was the forerunner of IKEA flat packaging (and possibly as maddening to put together).

Securing image rights for a large project such as JUMP was also part of TD Heritage’s envelope. Working with archivists, librarians, artists and photographers, we worked out agreements and managed the transfer of digital files. We worked with stakeholders, most particularly tractor enthusiasts who were keen that the tractors be treated respectfully. We provided considered feedback for almost every aspect of JUMP’s public face, from signage fonts to playground equipment.

As the developer of interpretive plans and texts for the exhibition team, TD Heritage was responsible for interactives such as the Play exhibit, where visitors grab a costume, jump in a car, and star in their own movie. We developed video interactives, finding historical films and editing them for maximum impact. Some of the elements we developed and wrote for were: a memorial for J. R. that included interviews; finding and selecting quotes for permanent display in architectural features; writing for kiosks that inspired visitors to get involved in classes and activities; and developing attractors such as the Play exhibit and the Nest, a contemplative space for break-out meetings.

Some of the more complex interactives, such as the Play attractor, warranted a test bed. Working with the computer systems team, digital artists, and 3D designers, TD Heritage helped test and evaluate the experience. Visitors used mockups of the exhibit while we watched remotely, evaluating whether visitors knew what to do, what barriers existed, what resulted from missteps. We conducted post-interviews to determine relative enjoyment of the experience and tweaked the interactive accordingly.