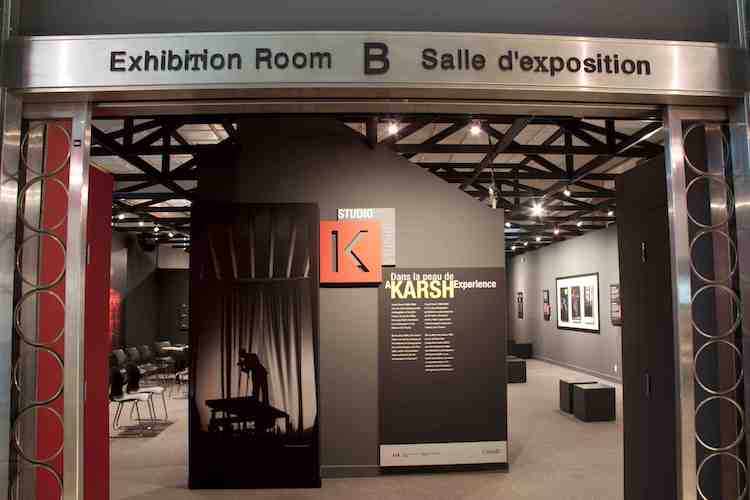 For much of the 20th century, Yousuf Karsh was arguably the world’s most famous portrait photographer. In 2009, his home town of Ottawa celebrated him with Festival Karsh, a multi-pronged series of events which included workshops, lectures, tours, and (of course) exhibitions. As Education Curator at the Portrait Gallery of Canada, which holds the Karsh fonds, Elizabeth Todd Doyle worked on two projects: the Karsh: Image Maker exhibition, a joint project of PGC and Canada Museum of Science and Technology, and Studio K at Library and Archives Canada, which focussed on Karsh’s contributions to Ottawa’s theatre scene.

Karsh: Image Maker featured most of Karsh’s most well known works, as well as his cameras and darkroom gear. The detailed Interpretive Plan had to address a central challenge: how to reach both families with young children (the CSTM’s key audience) and Karsh enthusiasts? The exhibition was beautiful, dramatic — and fun. Families learned to create their own portraits in the hands-on studio, played with Karsh magnets, and used crop techniques to create more impactful portraits. Enthusiasts experienced the drama of Karsh’s best work, decoded his careful choices, and took a peek behind the scenes at his studio. Karsh: Image Maker won the CMA’s best exhibition prize for 2009.

Studio K used Karsh’s earlier work at the Ottawa Little Theatre to introduce audiences to his tableau work. Elizabeth Todd Doyle was responsible for managing the content, creating the interpretive plan, working with design, and developing a theatre experience for school groups to create their own lighting to dramatic tableau effect.